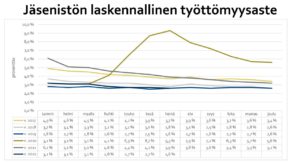 The number KOKO members has been growing steadily over a long period of time. In 2020, the coronavirus pandemic caused a clear spike in the number of membership applications, but the growth has continued even after that.

Read more about the statistics for June and July in our revised statistical compilation, which you can find here (only in Finnish).